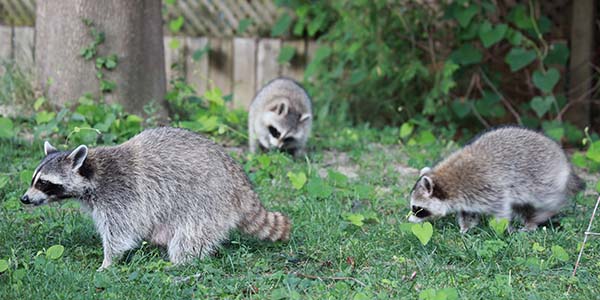 Raccoons are nocturnal animals that are mostly seen by themselves wandering urban areas tipping garbage cans to find their next meal. However, people have often wondered if raccoons live in groups or packs like wolves do?

Considering the raccoon’s short lifespan of about three years, it is unlikely that raccoons will develop a lasting bond with their family or pack. Usually, they are seen by themselves during the day and only come together to mate before splitting up again for good.

However, there have been instances of raccoons traveling in groups. In these cases, it is unlikely that they will be together for long as well since there are no young to protect and the mating season has ended. Let us explore the raccoon’s social habits and whether or not they travel in packs.

Male and female raccoons have differing social habits. Female raccoons are more gregarious than males, which is why they live in larger groups, especially during the rearing season. Related females form tight-knit groups of up to 12 raccoons and these family units will stay together year-round and work together to raise their young.

Male raccoons can either form a loose group of four or solitary depending on the situation and population densities in the area. Raccoons like to stick together in a group during winter or when breeding season comes around. This is to protect themselves from other raccoons that might try to fight them for a chance with the females. Male groups however are not as tight-knit as female groups and tend to break apart from each other more frequently.

Raccoons are thought of as mostly solitary animals, coming together only for mating purposes and to raise their young. However, they do live in small groups with other raccoons; these are called a gaze or nursery. Raccoon families tend to be found anywhere between two and eight or more individuals.

Males will usually establish a home range, marking it with bodily secretions, and often overlapping with another male’s territory. Females also protect an established territory, but this may overlap with her mother’s as well as that of any future mates she chooses to have. The size of these territories can vary greatly depending on food availability within the region where she lives.

Do Raccoons Hunt or Travel in Packs?

Raccoons do not generally hunt as a pack like wolves for example; the majority of adult males tend to be solitary foragers and only travel with other members of their species when it is necessary for survival. And that is what raccoons do during winter months, when the weather is cold and food is scarce they will form groups of four and forage together in small packs to find easier sources of food. The smaller groups make hunting much more efficient and the raccoons will usually target prey species that are abundant and easy to catch such as fish, frogs, or turtles.

Raccoons are known to travel with other members of their species during mating seasons. During this period they will usually team up together and fight off any other males that are trying to claim territory or a female that’s ready to mate! or if they are defending themselves against hungry predators that want to eat them (such as coyotes and wolves).

Raccoon families usually consist of a mother raccoon, its kits (baby raccoons) who stay with her for about 8 to 12 months but sometimes longer depending on the climate conditions. When a female raccoon is caring for her young, she may allow them to stay with her until they mature which can be up to one year old. Once they reach maturity though, it is time for them all to go out on their own.

The typical size of a raccoon family group is between three to ten individuals with around four being average, although larger families have been reported. The males do not actually join the female’s nursery after they breed. It is the female that cares for and raises their young. The males will either leave or stay solitary throughout this time period.

How Many Raccoons Live Together?

Females form larger groups while male raccoons tend to stick together in smaller groups. If you are seeing more than one raccoon at a time then there is probably only one explanation for this behavior: breeding season! Raccoons are more social during this season and will often spend time with members of their own species to ensure survival. If you ever see raccoons that are not acting aggressively towards each other then they might be related, but it is also possible the two animals are mother and child or siblings.

Female raccoon packs can sometimes get quite big especially if more than one female shares territory with each other during the breeding season. Young raccoons would usually stay with their mom until it is ready to leave the nest and go off on their own and start mating.

Do Raccoons Live in Packs?

Mother raccoons are known to live in family groups especially when they have young children. These are matriarchal groups where the females take turns caring for the young. The only time males join these groups is during the mating season or if they are young enough to still need their mother by their side as protection (they stay with the family until they become mature).

Males on the other hand tend to form smaller packs that consist of up to four raccoons. These may be seen together throughout most months but usually scatter at dawn and dusk when hunting or meeting potential mates. Raccoon families gather mostly after dark even though some members might hunt separately.

Do Raccoons Travel in Pairs?

Female and male raccoon pairs usually only last while the female is nursing her young; however, some of these animals can live together year-round until the mating season rolls around again. They tend to be quite territorial and could display aggressive behavior as unrelated males often kill the young ones of other families in order to increase their own chance of mating.

How Far Do They Travel?

Raccoons usually do not go far from their home range and will stay in a certain territory when they are scavenging, although they can sometimes move up to 10 miles in search of food or mate. Most raccoons will travel within the same area, but they may also roam when breeding season comes.

If you see a raccoon in your home or yard, chances are that there are more nearby. Female raccoons in gestation often find their way in attics of homes where they will deliver and rear their young kits. Mother raccoons usually only travel alone when they’re scavenging or making their way back to a den that’s further away from where you spotted them initially. If you see one raccoon, the best thing to do is leave it be and check your property thoroughly afterward because if there was one on your property then chances are there will be others too!

Problems Caused by Raccoon in Homes

A mother raccoon raising her young in your home is dangerous for your family and pets. If you find a nursing female, she will be quite protective of her babies and may attack anyone nearby. Their feces also carry several diseases that can make humans sick.

Raccoons in Homes: Prevention and Removal

One way to prevent a raccoon from coming back is by sealing off entry points like vents, holes, loose roof shingles, or broken pipes on your house. You can also use repellents that are specially designed for these animals but only after you have checked if there are any babies present inside first!

A professional should be called immediately when you spot one of these mammals because they know exactly how to handle it without causing harm to the raccoon. When dealing with baby raccoons always keep an eye out for the mother too as she may return looking for her young at any time!

Raccoon removal from homes is a complex and tedious process that involves using humane cage traps and releasing the animals as far from your home as possible. This process requires a qualified and experienced trapper who knows how to operate the traps and remove animals safely and humanely.

Raccoon removal should only be handled by professionals because these animals can carry diseases like raccoon rabies and roundworm which can be transmitted to humans if they are bitten or scratched. Raccoon feces can also carry parasites which is another reason why you should never try trapping these animals yourself!

If you have a raccoon in your home, call the professionals at AAAC Wildlife Removal. We will find out where the animal is living and remove it efficiently without harming it. Contact us now for more information about our services and how we handle wildlife problems safely every time!